On arrival in Uganda, we met Shaun from Beeutifulcreations.org, a social enterprise working with local beekeepers 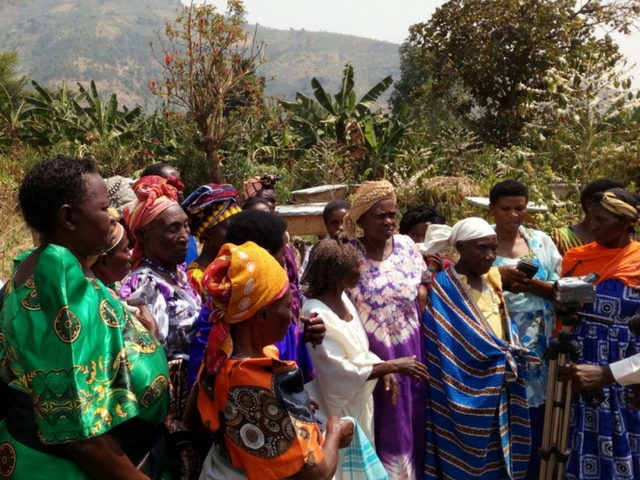 On arrival in Uganda, we met Shaun from http://www.beeutifulcreations.org, a social enterprise working with local beekeepers to make and sell a fabulous range of value added products. We were given honey with our winter tea and bees appeared immediately!

On Friday we travelled North from Kigali to Kasese. Just outside Kasese we crossed the equator and passed ahead of elephants. Daniel, Grace and their family were thrilled to see us again and the football was a big hit. We are very fortunate to have these wonderful folks leading our work at LIDEFO.

We took our trainee project manager Venetia to see a model apiary and then to visit the honey collection and processing centres.  Despite severe drought last year, since our visit to LIDEFO in 2014, great progress has been made. The team are making 100 hives for a local land owner who they will also train. A good example of a group developing its own income after our initial support has ended.

Below is a photo of Grace’s Shop and the LIDEFO Honey Purchasing Centre. We shared ideas about new ways to deliver projects. We agreed to experiment with recording key data, asking chosen families to record our impact on their life style and linking further project stages to success in earlier stages. We explored ideas for making honey based sweets, bee tourism and maintaining the loyalty of new beekeepers to LIDEFO.

This photo shows where beekeepers in the area take their honey. Once LIDEFO have purchased the honey, they process pack and sell it to retailers.

On Sunday we travelled to Ibanda Parish to audit our Noah’s widows project. First we joined the morning church service and I was unexpectedly asked to address the congregation. Various senior church officials had come especially to meet us. They thanked us and Bees Abroad at every possible opportunity. We were shown some honey they collected in an alter wine bottle!

After the service we visited the apiary and discussed progress with the widows. We concluded that the project is progressing well but that the drought of last year had slowed things down. We were pleased that hand cream was being made and earning a little extra income for the widows.

In the evening, we assembled a tasting panel for our test batch of honey toffee we helped LIDEFO to make.

On Monday we spent the day assessing our project for the Abughama self help group. There are three apiaries in three villages. At one of the apiaries we were given honey comb to taste from a hive only installed four months ago. We put astonishing result down to the perfect conditions for beekeeping. We visited six apiaries but most interesting was meeting the beekeepers, their families and local dignitaries.

You will see below a water feeder for bees doubles up as drip tray for the tasing up and a watering point for the chickens!

We are now en-route to Rwenzori Women’s Resource Centre for Community Development. We went close to the border with DR Congo and right on the equator to meet with two very different groups who have asked for support from Bees Abroad.

Today we met the management of the Rwenzori Women’s Resource Centre for Community Development. First we had to work out why so many men were present. Our challenge is to structure a project which empowers the women in society where the position is so different to ours.

In the afternoon we met the Kiringa United Beekeepers Association. They all had some experience of beekeeping but had not received any training. Their principal request was for knowledge to help improve the yields of their apiaries. We had some fascinating conversations which underlined just how lucky we are as UK beekeepers. We visited an apiary in the most beautiful location but with some strange box shaped hives and one new Langstroth.

Above you will see Venetia taking cotton from a mop head, platting strands together to make a wick.

In the foothills of Rwenzori mountains the people have a different concept of time and distance. Daytime is divided into four. With the exception of the well educated, hours and minutes are not understood. Distance is measured by the number of valleys in the mountains between places. They are quite unable to tell distance by measurement in Kilometres. Short distances are measured by marking sticks. This makes for some interesting conversations!

Today we heard the call of a Honey Guide Bird (indicator indicator). This bird guides predators, including humans to hives of bees with its distinctive call. When the predator breaks into the hive it feeds on the debris left by the predator, it can even digest wax.

On Friday we drove for six hours in dirt roads. Fortunately, there was very little traffic although this truck travelling from the Congo was intimidating!

We arrived at our Bwindi Batwa project and received a very warm welcome. We stayed in rooms attached to the local hospital and discovered that honey is being used to treat patients. We stayed in this accommodation adjacent to the mushroom growing shed on the right.

On Saturday we left Venetia in Buhoma to inspect the hives and join in allocating goats to the Batwa. Venetia is an expert in goats and bees!

When we arrived at Murambo, we met Ezra our leader at the Murambo Beekeeper’s project. Ezra had planned wall to wall visits of member’s apiaries. Our small involvement with this group has already lead to a four-fold increase in membership, so we need to work out how to cope with this increased capacity. Most members use log hives because there are plenty of trees, or they use hives constructed from wattle and daub as shown in the picture.

We visited a group who use mainly traditional hives. One had three in an exclosure in his garden.

This video shows a traditional smoker being used which is very effective. The bees were very calm and well behaved.

We visited a porridge shop. Porridge is a mildly alcoholic drink made by fermenting a mixture of lie grade honey with water and sorghum flour. The photos show the price list – little too much of it is drunk in this area.

We met one of our groups in Church which had wattle and daub walls and corrugated iron roof. One beekeeper described drone congregations and we were able to explain to the group what they are.

The next day we crossed at Rwanda, at Kamwezi a remote spot on a dirt road. No other traffic crossed for the whole hour we were there. We called into the Umutara school for deaf children.  At this school we run a beekeeping project that integrates into the school curriculum. We found they had already made a start without us! This picture shows two students with the traditional hives talking in Rwandan sign language. The school has accommodation available for a project manager, we just need to find one!

We enjoyed local honey served to sweeten our tea which tasted very smokey, a common problem here. We met a group of beekeepers who applied to Bees Abroad for help. We gave them an introductory training course and spent time exploring why their yields from traditional hives are low. The conclusion was that we should try to set up a training apiary to see how the use of Kenyan Top Hives would improve the situation.

On Thursday we braved Katonga, at Rwandan favourite breakfast. It’s a yummy combination of boiled potato, savoury bananas and lumps of beef in tomato sauce.

On our second day of teaching we collected acacia, mango, daisy, hibiscus and begonia flowers and grasses to give a visual aid to help explain about nectar and pollen collection. We discovered there is no word for pollen in Rwanda. We said good by to the Kigudugu beekeepers at lunch time and drove to Kigali where we saw the first Mzungu for several days.

Today we travelled from Kigali to Kilimanjaro on a very small Rwandanair plane. After a long drive we arrived at our lodge where we discovered they kept a few bees. We bought a jar of honey to take to the Ulster Beekeepers Conference for tasting.

During the weekend we took a couple of days rest from beekeeping. We spent a day at Lake Manuara National Park bird spotting and game viewing. We visited the Ngorogoro crater and the Olduvai gorge.

We found a fence with bee hives hanging from it designed to keep elephants out of a vegetable garden. Elephants are very scared of bees and similar fences are widely used. The design of the fence was not strong and several hives were not colonised.