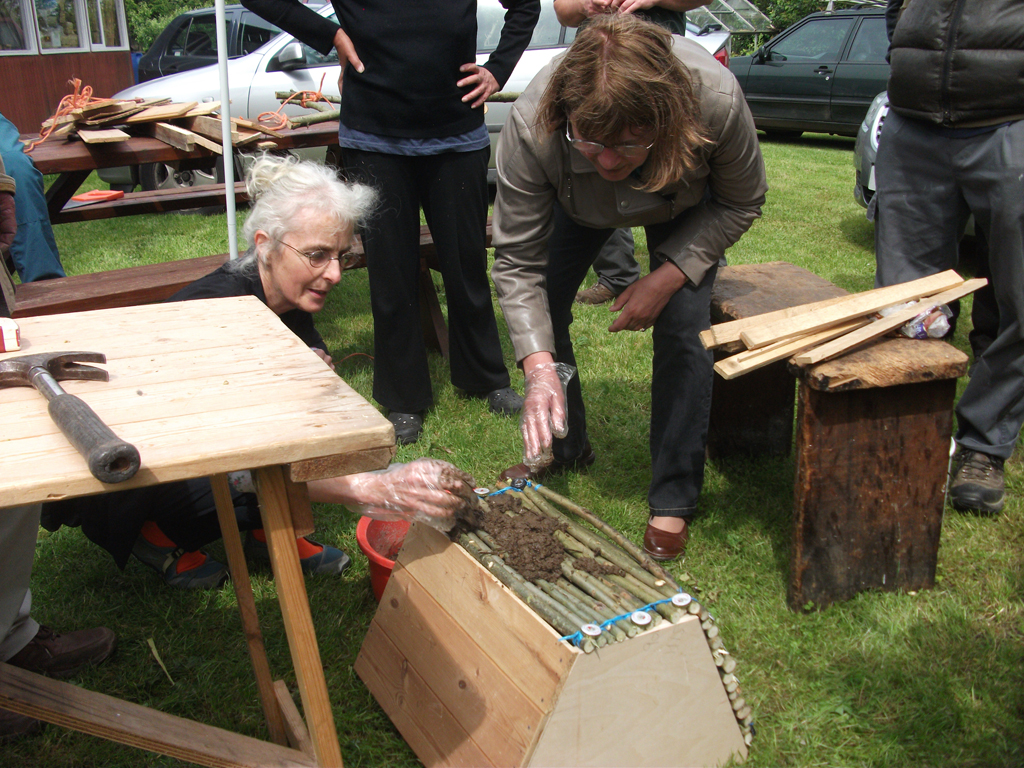 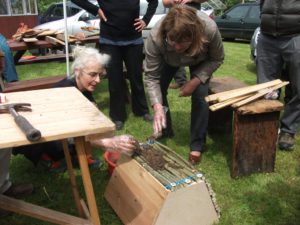 Twelve beekeepers from across the UK were invited to a Project Leaders’ Day at John and Mary Home’s Honey farm at Deepers Bridge, near Coventry, for a beekeeping day. Certainly for the writer, one like none other. The purpose of our visit had absolutely nothing to do with beekeeping as we UK beekeepers know it, but was all about beekeeping in Africa and the various admirable projects in which Bees Abroad is involved. Before turning to specific detail, let me say straightaway that the experience was mind- blowing in the sense that we were, for example, to learn that our UK conventional, perhaps even petty thoughts, involving say, the pros and cons of one hive against another or perhaps the advantage and disadvantage of double against single broodchamber working have no application in Africa or elsewhere in the Third World. In particular, we were to learn that standard UK and US equipment, although introduced to Africa by others in the past, have no application, at least in the long run, for two fundamental reasons: cost and sustainability.

Why cost? The cost of a full National Hive and additions such as extractors and the like are quite beyond the financial resources of those being helped by Bees Abroad, and even if gifted in the first place, the local beekeepers would never have the financial means to maintain them. We learned that one of the key aspects of Bees Abroad’s work is to ensure that local beekeepers can, for almost no cost, make and maintain equipment from local sustainable sources. This is a vital need which may make all the difference between a family surviving or going without food. As a further example, the produce of one hive may keep an African child in education for one year. Of course, cheap production from the hive will achieve little unless produce is fit for sale and is properly marketed – other aspects of Bees Abroad’s work.

It was made clear too that there would be no opportunity for us to sit back, and soon we were put to work. Our first job was to make a top bar hive, for which we were divided into two teams. Our raw materials for the task were a piece of cardboard, a piece of A4 paper(double folded it makes an excellent set square), a saw, one or two strips of wood, some straight poles (one side of the wood was made with the boards, the other with the poles), some Deepers Bridge mud plastered over the poles to render them bee-proof, some rather superior nails purloined from John’s bee store, some old beer bottle tops, to be used as washers for nailing down the poles, a short length of binder twine to tie the poles together before fixing to the box, and some bars of wood coated with wax, as starter strips and finally a hammer. I was duly reprimanded by Pam Gregory of the Bees Abroad team “You know Andrew, if you were building this hive in Africa, you would not be able to use so many nails!”. Point taken. 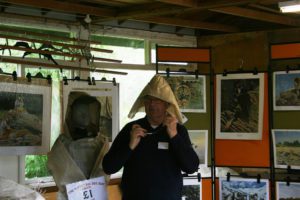 Job achieved: we were into bee suit making. None of the splendid UK off-the-shelf stuff, but suits which African families can make with whatever suitable material is to hand. For us it was maize sacks; one for the legs, one for the body and one for the head and arms, all sewn together after first using a smouldering twig to seal frayed ends. Fine-weave black material of whatever type then makes the veil.

Next we were into wax rendering. Dirty wax is first washed to reduce impurities including honey. The residue is then broken down and put into metal drums and water added to the mash. A fire is then lit under the drum and its contents heated sufficiently to melt the wax which when cooled and solidified is removed from the drum. The process is repeated until clean wax is obtained. This is the most frequently used process. Local people are, however, encouraged to use whatever is to hand to produce clean wax, for example, an old polystyrene tray into which washed wax had been added and enclosed with a sheet of polythene and put out into the sun has proved to be a viable solar extractor. This production and export of wax is important to beekeepers, and users and processors of wax elsewhere in the world. For example, much of the wax used by our UK suppliers is sourced from Africa.

In the afternoon, we went onto Mary’s kitchen to process and to try out a quite extraordinary variety of products from the African hive, including soaps, cream and polishes, each with its own de 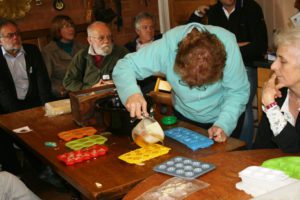 licate- or in a few cases- indelicate smells.

All in all, it was a great day out, but more important was its witness to the marvellous work being done by the Bees Abroad team. Of those present, it is invidious to mention names, save for John and Mary Home and Pam Gregory. Their lead and dedication is inspiring and through them and others much has been achieved, but the task ahead is enormous.Why not join them and through your love of beekeeping bring joy and hope to others? 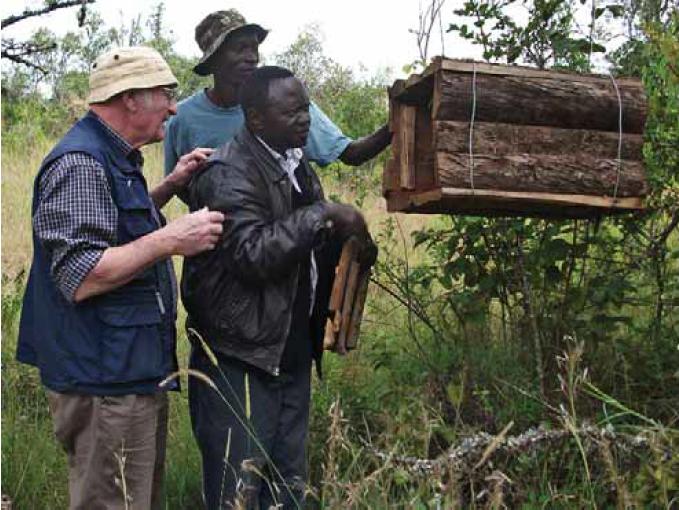 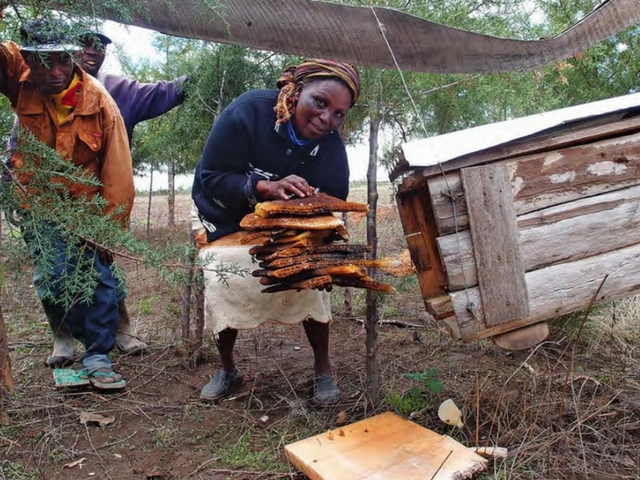 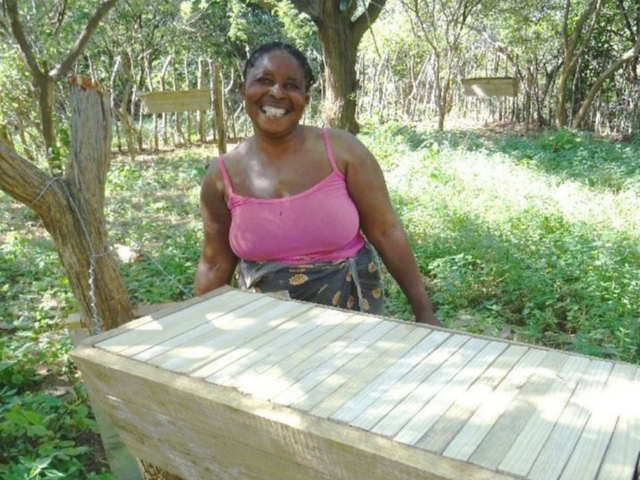